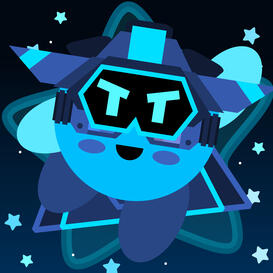 My name is CYON. It is a pleasure to meet you, fellow visitor.
Welcome to the CYONSPACE!
This site is viewed best on desktop, but mobile works too.

NAME: EleCyon
NICKNAME: Cyon
SPECIES: Puffball
SPECIMEN ID: ID-X72
AGE: 20
BIRTHDAY: JULY 2SPECIMEN ID-X72, better known as "CYON", was a failed experiment - an incomplete attempt at recreating the hero of Popstar, tagged by Newer Lab Discovera as "ID-K92". In their experiments, they sought to recreate his species in an attempt to create new warriors who can protect the New World citizens that have left for space and beyond.A freak accident happened during research, and all the clones have escaped containment, including ID-X72. In an attempt to escape, CYON was able to copy the Jet ability from a broken-down Jet engine to boost ahead of the researchers, but he wasn't able to discard it from then on. Eventually, he escaped Newer Lab Discovera - the spaceship holding all services for it, and was attempting to reach Gaia - Planet Earth, when he was cornered.Despite this, CYON made a quick escape by using a computer terminal that was connected to Gaia's internet (intended for researching on Earth's inhabitants), and had himself warped into the Cyber World - the World Wide Web. From then on, he calls himself EleCyonX72 - the Techno Kirby that aims to protect the Internet and his newly-made friends there.

A Super Mario War 2.0 Mod by EleCyon
The greatest battle in Neko Land is about to BEGIN! 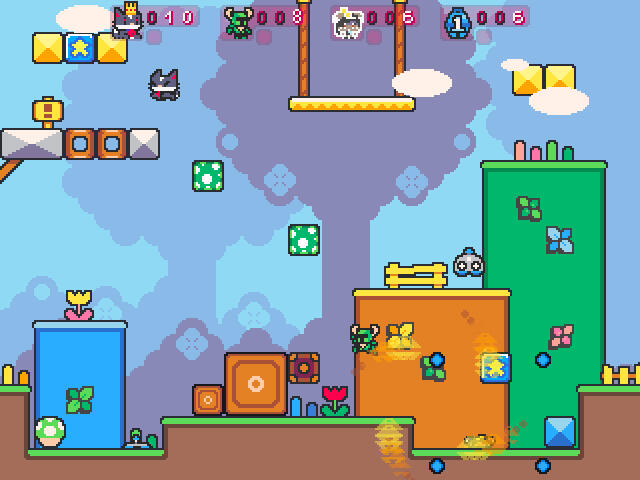 Duke it out with over 300+ characters in Neko Land's ultimate stomp-and-run battle royale in Super Cat Wars, a huge Super Mario War mod based on the Super Cat Tales indie game series by Neutronized! Choose from over 20 different game modes, create your own maps with the SMWar Level Editor, and be the Neutronized Battle Royale Champion!Super Cat Wars started out as a project aiming to port most of Super Cat Tales' tilesets to Super Mario War, and eventually grew into one of the biggest mods in the making. Released by EleCyon on March 30, 2022 after almost three years in the making, it is now available for download on The CyonSpace and on GameJolt.FEATURING:
- A huge graphical overhaul featuring the cast of Super Cat Tales
- 300+ new skins to play with, including costumes and team alts
- Unleash your creativity with 300+ new backgrounds and 50+ tilesets
- Quality-of-life features ported over from SMWar 2.0 by mmatyas
- A full-fledged Story Mode with an original soundtrack
- Colorblind mode, and is LGBTQIA+ friendly
- Cameo appearances...
- And so much more!This project is made in memory of Super Mario War's original creator and developer, Florian Hufsky, who passed away in December 2009. Thank you for creating such an amazing game, and thank you for letting everyone carry on its legacy.

The S3RL Trilogy is a three-comic series of a hybrid of webcomic illustrations and narrative text, based on Just Shapes & Beats by Berzerk Studio. It includes the following stories:- Hexagon's Adventure (2019) - This chronicles the origin story of the fifth Guardian of Paradise - Purple Hexagon. When a corrupted alien crashlands onto Paradise and captures all of Hexagon's friends as well as the Tree of Life, it's up to Hexagon to set out on a rescue mission and free Paradise and his friends, while fighting in the four Guardians' stead.
- Pentagon & the Fiveside Force (2019) - This second story focuses on Pentagon's adventures with Captain Percival Perilous & the Fiveside Force in the depths of space to stop a mysterious corrupted army of robots from destroying Percival's home planet and threatening the entire universe.
- More Shapes + Raves (2019-present) - The third and final story, which is currently in progress. Focuses on the adventures of Triangle and Boat as they venture into a new dimension to chase down Fresh (The Boss) and take back the Ravortexia. It's the biggest in the making, but hasn't seen a lot of progress so far... 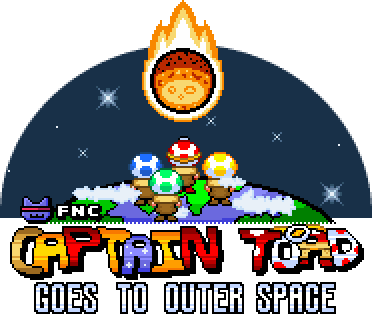 By Team Starshroom (Led by FutureNyanCat (Cyon)Captain Toad Goes to Outer Space is a reboot of an old cancelled Super Mario Bros. X project I've made in 2013, made for SMBX2. This adventure sees Captain Toad on a quest to stop Planet Mars from colliding with Planet Earth.Features:
- Eight unique planets, including Earth
- A Shop system
- Playable Captain Toad with jump controls and powerups
- Secret Green Star for each level
- New midbosses and bosses
- An all-new set of villains (Sorry, Bowser!)
- Modern SMW art style with some creative liberties
- And more! 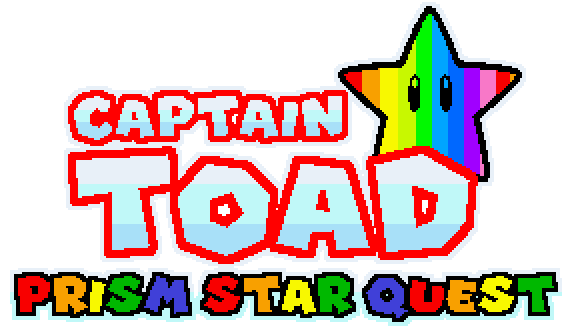 By Team Starshroom (Led by FutureNyanCat (Cyon)Captain Toad: Prism Star Quest is a minisode patterning the no-jump platformer-puzzle gameplay of the Captain Toad levels in Super Mario 3D World and Captain Toad: Treasure Tracker while retrofitting it into the 2D platformer gameplay of SMBX2.Embark on a mission with Captain Toad as he sets out to retrieve the legendary Prism Star for Princess Peach's birthday. Along the way, he'll face new dangers and all-new gimmicks, as well as a new rivalry with Kuroku the Raccoon Thief!FEATURES:
- SMW artstyle with some modern liberties
- 28 Captain Toad puzzle levels, designed by me, MegaDood, Prism Emerald, and more!
- Fun gimmicks for each level
- A few sidequests
- Explorable Toad Town
- Cameo appearances...
- And more!